Aisha Bishara is a Staff Tribune in the Army of Callow, friend and aide of Juniper, original member of the Fifteenth Legion and part of Catherine Foundling's inner circle.

Epigraphs with extracts from "the personal memoirs of Lady Aisha Bishara" have been scattered throughout the series.

Originally introduced as Ratface's ex-girlfriend and Captain of the Wolf company in the War College. She was one of Catherine's opponents in the five-company war games, and later instantly brought into the Fifteenth Legion by Juniper's request.

Aisha is a Taghreb noble with a strongly connected family line spread out over most of Praes. While their glory days are long gone, they still are desirable consorts for most other nobles, due to traces of djinn blood in their line. According to Ratface, Aisha can "put her hand into an open brazier and feel no pain, or spend an entire day under the sun of the Devouring Sands and not have her skin burn." [1]

Aisha is very close with Juniper and has a calming influence on the orc. This to the extent that other will plan around Aisha's presence if possible, and they have to deal with Juniper.

Aisha is described by Catherine as exceedingly pretty, with a heart-shaped face, tanned skin and wide dark eyes. Her hair is cut in a short bob.

Aisha believes in good manners as taught by her noble Praesi background. She always looks her best, even when people around her are worn out.

Juniper : Aisha and Juniper are incredibly close. Aisha has at some point refereed to Juniper as "Something like a sister and more."[2] Aisha has taught Juniper proper manners, which the orc usually will try to adhere by whenever the Taghreb is near. Juniper trust Aisha enough to use her to test out strategic ideas, using her as a mental sparring partner.

Hasan Qara : Ratface and Aisha were dating at some point before Catherine joined the War College. Ratface retained an obvious weakness for Aisha even after they broke up.

“In most histories of the Uncivil Wars, the Battle of Three Hills is but a footnote – especially given its proximity to the much more contentious Battle of Marchford. But for us, back then? Marchford might have been the crucible that forged us, but Three Hills lit the furnace.”

-Extract from the personal memoirs of Lady Aisha Bishara [3]

“In its infancy, the Fifteenth was in the awkward position of being within spitting distance of the heart of the Empire without being part of it. Legate Juniper, ever brutally sardonic, pointed out that given how tall their manors stood, they had a better chance of landing the spit on us than us on them. History wasted no time in proving her correct.”

– Extract from the personal memoirs of Lady Aisha Bishara [4]

“There’s a degree of argument among scholars as to whether the Liesse Rebellion was the underlying cause of the Uncivil Wars or the first of them. I was there, though, and I can tell you this: the seeds that were sown in Liesse are what we reaped in the years that followed.”

– Extract from the personal memoirs of Lady Aisha Bishara [5]

“It admittedly took me a few years to make my peace with the fact that Lady Foundling’s take on diplomacy is essentially to bring a bottle of cheap wine and a sword to the table, then remind the interlocutor that while the wine might be awful it is still arguably better than being stabbed.”

-Extract from the personal memoirs of Lady Aisha Bishara [6]

“Callowans as a people can be summed up by the fact that, before the Uncivil Wars had even come to a close, it’d become a common boast among the populace that the Black Queen had not even spent a sennight in Keter before having several counts of arson and murder to her name.”

– Extract from the personal memoirs of Lady Aisha Bishara [7]

Interlude: Graves We Have Yet To Fill

“The middle years of the Uncivil Wars can roughly be described as a series of conflicts fought to determine peace terms. The tragedy of those years, in retrospective, can be said that while the overwhelming majority of them desired peace no two Calernian powers could agree on what exactly the terms of it should be – and so to war they all went, convinced every step of the way that the others were at fault for it.”

– Extract from the personal memoirs of Lady Aisha Bishara [8] 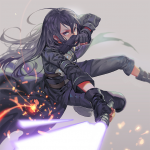