Shade
Akua Sahelian is a Noble who currently exists as a disembodied spirit bound to the Mantle of Woe. She previously held the Names of Diabolist and Heiress.

Akua comes from Nobility and has a deep respect for traditional evil. She disdains what the Black Knight and the Empress have done with the Empire and wishes to return it to the old ways.

While on the surface Akua can appear to be cold and callous, there have been a few moments in which this facade has dropped, such as when Heiress had to choose which of her subordinates Catherine would murder, and in her private scrying sessions with her father. Heiress, similar to Catherine, is motivated by a desire to be better than her predecessors and seeks to free herself from the bonds of her mother and to triumph over Malicia.

Akua has a unique relationship with her father, Dumisai of Aksum. She wishes he had taken the name of Warlock. She also thinks that he is the one person who does not have any ulterior motives and loves her for who she is; he thus became her biggest weakness.

She also cares for her subordinates, despite outward appearances, evidenced by her asking after her minion during the culmination of book two.

Contrary to her mother Tasia's designs, Akua does not wish to remain underneath her mother's control for long but she uses her influence to further her own plans.

Akua is always dressed elegantly, described as beautiful on numerous occasions. She is also noted to have a well-endowed figure and to be quite tall with a pretty face, as noted by Catherine.

Akua gained the name Heiress most likely as a result of her status as a noble of Wolof. Her family is aligned with many powerful factions in Praes, with her mother being the leader of a faction which opposes the empress herself.

Akua later gained the name Diabolist by a series of actions, beginning with her release of a demon on the town of Marchford and later sacrificing Summer fae to open a Greater Breach. Each of these actions was calculated so she would attain the name of Diabolist, a name rumored to once be held by Triumphant

Akua appears to have lost her name upon her death and subsequent binding to Catherine's cloak.

Akua's main weapon is her mind, with which she is able to weave schemes that manipulate her many powerful enemies. She twists one of her subordinates to create a wager wherein she either stalls squire's progress or gains control of an entire legion, in a win/win situation for her costing nothing but the broken finger of a minion. Akua also has a deep knowledge of Names she knows about the nemesis story between her and Catherine, she also understands how to make a pact between names. She transcends her name by playing a chess game that she hates as well as freeing hordes of demons, and nearly gaining control over angel of contrition.

Heiress: Is not a combat-oriented name, her skill lies in planning for confrontations, in direct combat it has been shown she prefers to use mercenaries (as evidenced in the closing of book 1) and plan situations in which she is out of the line of fire, her name tends towards a subtle means of dispatching her enemies.

Diabolist: The Diabolist gained the ability to manipulate otherworldly beings, (such as devils and demons) her Name allowed increased proficiency with opening breaches to hell. After acquiring her name she became more proficient with using combat magic, in addition to a magical shield. She had gained all three of her aspects: Call, Bind, Claim. 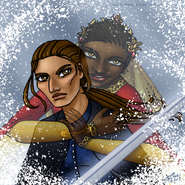 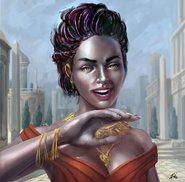