The Duni are one of the human ethnic groups of the Dread Empire of Praes. They mostly recide in the Green Strech .

Duni tend to have lighter skin tones than the rest of Praes due to many of their ancersestors being of Callowan origin.

The Duni are seen as a lesser group in Praes because of a their Callowan ancestry. Living mostly in the Green Strech, the Duni comprise of mostly farmers, supplying the rest of Praes with most of the food produces in the Empire. No Duni has ever held position as Dread Emperor/Empress, though there has been some who has held the tittle of Black Knight. 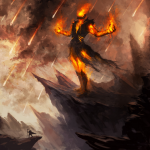