Hakram of the Howling Wolves

Living
Hakram "Deadhand" of the Howling Wolves, is Catherine Foundling's right-hand man, and a member of the Woe.

As a child, Hakram never felt the passion for war that his kinsmen did. He was quite intelligent and good at fighting, allowing him to earn his way into the War College, but he just took part because it was there to take part in, without any real personal investment in war. He was expecting to simply drift through life without any real purpose until he first met Catherine.

During the second war game she was involved in, he came to get a sense of how much Akua had meddled to attempt to sabotage Catherine, and it made him realize that a lot of the ruling class of Praes would rather do anything than let commoners like himself and Catherine be successful, even if it meant Praes of even Evil being weakened. He also realized that Cat had great potential but serious blind spots, and that he could help cover them.

Hakram is generally regarded as stoic and solid, in his build, his personality and his Name. He works extremely hard both on and off the field of battle to help the Fifteenth Legion stay strong and to support Catherine in everything she does. He serves as not only a right-hand man in combat but also as a secretary of sorts and a bodyguard. Even aside from these roles, he tends to spend a lot of time reading and researching to prepare for future battles.

He is also something of a gossip and a womanizer. Juniper comments that while he never had a hard time impressing orc girls, he started getting hit on to an almost disgraceful degree since his fight with Thief and the resulting gain of his Name and magical prosthesis. His fondness for gossip has also come in handy on several occasions, as he has been able to provide valuable information about the morale and opinions of troops in the Fifteenth.

He is truly fearsome in combat, given his natural strength as an orc is combined with the training of the Praesi War College, and his abilities further enhanced by a combat-oriented Name. He sometimes sings orcish war-songs in battle, further intimidating opponents.

Hakram is a tall Orc even by his species standards, and Cat is convinced he grew even taller after getting his Name. He has dark green skin Cat early on described as closer to brown than green, short furlike black hair, dark deep-set eyes and a small scar on his right cheek by the time he's introduced. While both broader over the shoulders than any human Cat have meet and muscular, Hakram isn't all that broad for an Orc.

As with all Orcs, the only hairs on Hakram's body are on the top of his head. Leaving him with hairless brows. He also sports a very impressive set of pearly wolflike fangs.

Hakram's changes his hair a few times over the story. By Book VI, he has grown his hair to go down to his jaws on the sides, far longer than what Legion or Army standards would allow. By the time of the Praesi Campaign, he had cut his hair short again.

Hakram has a skeleton hand grafted on as a prosthesis by Wekesa, after his original hand was cut off by Lone Swordsman. His new hand is at least as strong as the original and does not feel pain. It's never specifically stated which hand is Hakram's dead skeleton hand, but a legionnaire song in Book 3 implies it's the left.

Queen or king or Heaven’s get

Learn bitter with the last breath

The left hand gives only death

Hakram himself cut off his other hand while Cat was away in the Everdark, in an effort to make peace with Vivienne. During the Salian peace talks he learned to make a ghostlike hand appear instead for this second missing hand.

During the Arsenal events Hakram is severely injured by a demon, causing the Mirror Knight to cut off his arm without the skeleton hand, as well as a leg from the upper thigh on the same side, in an effort to save the Adjutant's life. This caused Hakram to be wheelchair bound for several months, before Masego crafted him prosthetics made from leather and grey iron.

Hakram's pin: The people serving under Adjutant all bore the same pin to prove their status. "A discreet painted iron pin in the form of a curled skeletal hand pointing its index, the enchantment laid on it serving only to prove it was authentic."[1]

When Catherine and Hakram went to visit the Warlock in Summerholm, he and Masego both mentioned getting a weak magical reading from him indicating that he was beginning to gain a Name. This was corroborated when he fought off the Thief basically one-on-one and survived, losing his hand in the process to the Penitent Blade.

The night before the Battle of Three Hills, he and Catherine had a conversation about what their goals were and why they were in the Legions. Hakram talked about wanting to beat the odds and "bring the roof down on [the] heads" of the Praesi elite who refused treat anyone else with respect, and Catherine talked about having decided that she would take control of Callow rather than let the people who had installed someone like Governor Mazus continue as they had.

He mentioned how before he had no plans as he did not have the blood lust that most orcs possesed and just decided to live through life. Then he noticed Catherine and placed his hopes in her and noticed she had many weakness that needed covering. He felt that he could cover those for her and realized he was good at this particular duty.

It ended with Hakram naming Catherine as Warlord and her in turn naming him as Adjutant. This was the point at which his Name was formally chosen, though it is unknown whether there was any significance to Hakram calling Catherine Warlord.

He came into his first Aspect, Stand, during the Battle of Marchford.

Hakram generally knows and share any information he could possible have access to, if it would help Catherine. For example, he read about Helikean military units including Spear Saints some time before the Battle of Three Hills, on the off-chance that they might end up fighting Helike after the end of the rebellion, and indeed they did appear during the battle -- his correct identification allowing Catherine to deal with them correctly, by avoiding melee and having Masego kill them from a distance. Similarly, he is known to be fond of gossip, but has admitted that even he doesn't know why people share their secrets with him. This likely represents a continuous form of his Find aspect.

As Warlord, Hakram has new aspects. 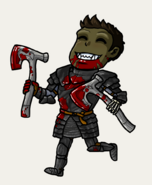 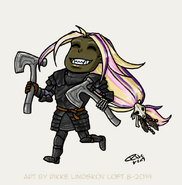 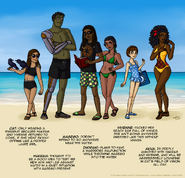