Hanno of Arwad is the current White Knight. He has fought against the forces of the Tyrant of Helike[2] and the Calamities[3] in Delos, as well as the forces of The Dead King,[4][5][6][7] and played an important part in resolving the coup in Salia.[8] He was put on trial by the Hierarch as part of an attempted attack on the Choir of Judgment.[9][10][11]

Hanno has been described to have skin that had a Thalassina tone to it, too pale to be Soninke but too dark to be Taghreb. Tall and built like a working man, with fuzzy hair cropped even closer than even Legion regulations demanded.

He often wears a long-sleeved grey tunic he’d rolled up the sleeves of, and has muscled forearms and calloused hands. Hanno is rather plain-faced, with dark brown eyes that had a sense of steadiness to them, peace almost.

Hanno was formerly a citizen of the 18th rank in the Thalassocracy of Ashur. His father was a 20th-rank citizen, a miner. His mother was an exile from Soninke, who worshipped the Gods Below. When his father was killed in a mine accident, his mother was cast out of her home and would have been sent to a "quarantine area". Instead of submitting to this, she cursed her captors by the Gods Below, and committed suicide to empower the curse. This led to Hanno's own status being threatened, and after refusing to denounce his mother, he was stripped of his tier and citizenship. This in turn drove him to seek guidance from the Choir of Judgement, who recruited him as the White Knight.

Hanno is almost unnaturally calm and collected. This is a result of his belief that he is guided by the infallible will of the Seraphim.

He frequently repeats that "[he] does not judge" in reference to the fact that he executes the will of the Choir without choosing for himself who deserves life or death.

He also seems to have a reasonable awareness of narrative conventions and how to exploit them, as he at one point noted that he and his companions would survive the landing of a magical tower falling out of the sky with them inside by virtue of it being obviously impossible to survive.

We first met Hanno as the leader of a band of heroes: the Wandering Bard, the Hedge Wizard, the Ashen Priestess and the Valiant Champion.[2] Little is known about Hanno's relationships with the other members of his band; he seems to have shown professional courtesy to his companions, though he somewhat distrusted the Wandering Bard, whose motives he found more inscrutable than those of his other companions.

This may stem from his main source of information about others being unable to tell him more than whether the Choir of Judgement believe that they deserve death, but this is purely speculative.

During the defence against the Dead King, Hanno acted as de facto commander of the Named, who otherwise acted outside the normal command structure. In this role he seems to have been generally appreciated and respected, both by the other Named and by the ordinary commanders.

In the aftermath of the attempted coup in Salia he got to know Catherine Foundling, and the two settled into a quite relaxed relationship, especially considering that she was still holding the title of Arch-Heretic of the East.

Hanno had trained for a long period of time before clashing with the Calamities. He was well versed in swordplay, allowing him to duel with the Black Knight; he was also effective at using the inherent abilities of a Knight of Good as shown by his ability to wreath his hands in gauntlets of light, giving him the strength to smash through even magically reinforced barriers. This light also allows him to burn whatever it touches, including himself. His experience has allowed him to adopt a fighting style that can adapt to his enemies, and given enough time he can triumph over any enemy.

Ride: Allows him to summon a steed of holy light which can ride far faster than any mortal mount and may be weightless. It also creates a lance of light at the same time. The steed forms very quickly and Hanno can move even before it finishes forming, meaning that this aspect can be used for a sudden burst of speed in combat.

Recall: Allows him to search the memories of past heroes as well as harness their abilities; also known as the flood. He uses this ability to identify fighting styles that can counter his opponent or are well-suited to the current battlefield. He also has the ability to create a weapon suited for that fighting style out of Light. When he delves deeply into a memory, he becomes "possessed" by the past hero, although he can return to himself at any time. Some examples:

Judgement?: Hanno's third aspect is unnamed in text, but seems to directly link him to the Choir of Judgement. When he first became the White Knight, he received a coin bearing crossed swords on one side, and a laurel wreath on the other. At key moments in a fight or when confronted by a malefactor, he may recite an invocation to the Seraphim, and then flip the coin to decide whether to try to kill his opponent, or instead take a prisoner or even make truce. The Bard referred to Hanno's coin flip as a "formulaic aspect". In one battle, the Black Knight attempted to kill Hanno while he was reciting the invocation, which resulted in one of the Seraphim striking Black down. It is not clear what other advantages Hanno may gain from having performed this ritual.

The Black Knight has commented that Hanno's abilities seemed to counter the Squire's then-current powers. His light abilities pose a threat at close range, which countered Catherine's tendency to brawl with her opponents at close range. His ability to take on the fighting abilities of warriors from the past would pose a problem for the less experienced Squire, and his Ride aspect would take advantage of Catherine's tendency to fight on foot or disregard her mounts. The ability allows the knight to be highly mobile and disengage from a dangerous fight at a moment's notice.

After losing his Name, Hanno lost most of his aspects except for Recall. During the war against Keter, Hanno once again became the White Knight after having two new aspects: Save and Undo.

Save: Hanno is able to feel the balance of victory and defeat around him as battle happens, allowing him to Save those he wish to.

Undo: Once a day, a death or calamity could be undone. 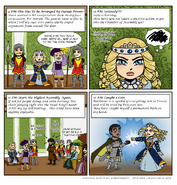 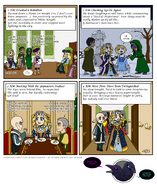 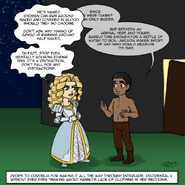