Dead
Ogre who holds the rank of a General in the Fifteenth Legion.

Hune was in the War College at the same time as Catherine Foundling being Captain of the Tiger Company. She was not seen in Book 1.

Hune came highly recommended to me by both Juniper and Hakram, and was brought into the newly formed Fifteenth Legion as Legate.[1]

Hune is commanding the 2nd Army of Callow as General from Book 5.

She is killed by the revenant Varlet in the later part of Book 6.[2]

As an ogre, Hune is normally most commented on her her size. Said to be at least 12 foot tall in Book 6.[3] Often she has to hunch over to be inside tents for meetings, and similarly her buckler-sized hands are commented upon every so often.

Hune has the cast of a brutish face, but with dark, intelligent and patient eyes. Cat at some point explaining that Ogre features are wider than human facial features would be.[4]

Hune's name is referred to both as Hune Egeldotir (Book 2-4) and later as Hune Egelsdottir from Book 5. 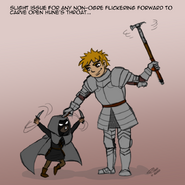