Alive
The other – Princess Rozala Manlanza, most likely – was maybe a few years older than me. Dark eyes and darker curls, with the kind of wicked easy smile that belonged more on Laure tavern girl than foreign royalty.

Rozala is in her early twenties when first introduced as the Princess of Aquitan during the Crusade. She is part of the faction opposing Cordelia Hasenbach as the First Prince of Procer because of a personal grudge over her mother's death during the Proceran Civil War. She became the leader of said faction after the Battle of the Camps. Despite her enmity, she maintains a close working relationship with the First Prince.

She has sworn an oath to rebel if Procer betrays the nations that came to its aid during the Tenth Crusade.

After Cordelia's attempt at winning Warden of the West from Hanno, Rozala stands to become the next First Princess of Procer.

Princess Rozala Malanza has been described as an Arlesite beauty. She's tanned, tall and curvy, with dark eyes and long dark curls.[1] After the war with the Dead between Book 4 and 5, she has a scar on her cheek too rough to have been caused by a blade.[2] She is fairly young, only a few years older than Catherine.[3]

As a child, Rozala was taught that ruling was her birthright, but also that it was a responsibility. She does not spend the lives of her men frivolously, nor is she unwilling to do even physical labour herself if it is necessary.[4] At the time of the Battle of the Camps, Tariq Isbili, the Grey Pilgrim, considered her "robbed of true morals by her uprising, but [...] with a sense of honour and duty that allowed some small sliver of them to remain," and had some hope that she would improve with time.[5]

Family: Rozala is the only daughter of Aenor of Aequitan, who was forced to drink mandrake extract after the Battle of Aisne;[6] for this, she has has sworn to take the First Prince's head or die trying.[7] Her younger brother, however, is currying favour at court,[8] scheming to take her place.

About five hundred years before present time a distant ancestor, Lorenzo Malanza, conquered the northern part of Levant for First Prince Charles Merovins; in particular, his victory at Tartessos is still the subject of song.[4]

Louis Rohanon: One of her closest allies after the Battle of Camps, Prince Louis of Creusens became a good friend and important ally of Rozala. Although she noted taking it further would be tricky without marrying him, which would be a diplomatic mess. After the Prince's Graveyard where Louis lost his royal title, he instead became her secretary essentially continuing the cooperation they already had.

In Book 7, Louis and Rozala are revealed to be married[9] with Rozala carrying a child.[10] 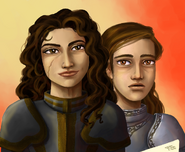