Acended
Sve Noc is a twin drow deity comprised of the sisters Andronike and Komena.

After making Catherine Foundling First Under Night they follow her and the 50,000 strong drow army as two crow fragments of power.

Sve Noc began as two mortal drow before the fall of the Empire Everdark. The elder sister, Andronike, was a member of the Twilight Sages, sorcerer-priests of the Empire. The younger sister, Komena, was a soldier.

Sve Noc's personality is somewhat fragmented into her two original identities as Andronike the Priestess and Komena the warrior.

After centuries keeping the drow in a perpetual Night killing spree, Sve Noc lacks a proper connection to ordinary mortals. Cat's been trying to re-teach them this through humor and banter.

Perhaps telling, the slivers of Sve Noc taking shape of Night-feathered crows, has been described as playing with and killing local wildlife such as rabbits, even if they have no need of actually eating.[1]

The sisters had long hair, amber eyes, and an androgynous look as all drow do. They lack the ageless look of the Mighty.

Andronike is usually in priest robes, and originally wore an ornate forged iron mask, with the sun at top and a half moon on the bottom. She discarded the mask as Sve Noc, when she no longer needed the symbolism.

Komena dresses as a warrior in good steel armour and a sword at her side. [2][3]

Sve Noc is usually describes as a floating face during Book 4. She has pitch black skin and perfect silver eyes. Either with just the eyes visible, or with a full face and long hair usually turning into wisps of Night.

The crows has been described by Cat as night-feathered or feathered in darkness, but otherwise seem to just look like a pair of crows to her. They have black eyes, unlike the silvery blue eyes the actual Goddess and the drows now have. [4][5]

Both Robber, Tariq and Indrani have been described as being unable to even look at the crows for more than a fraction of a heartbeat, without starting to feel some sort of eldritch terror. [6][7]

Bribe the Night by Gwennafran 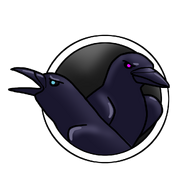 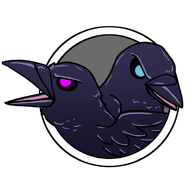 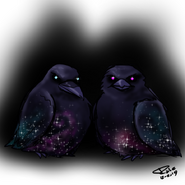