The Crusades are a series of wars waged against Evil polities. They have predominantly been launched by two Good nations: the Kingdom of Callow and the Principate of Procer against the Dread Empire of Praes and the Kingdom of the Dead.

Altogether ten crusades have been waged with only two being successful though we're currently in the middle of the Tenth. Out of these, five have been led by the Choir of Contrition.

The First Crusade was launched in the wake of the conquest following Dread Empress Triumphant’s ascension to the dread crown. After she conquered the whole of Calernia, a young knightess known as Eleanor Fairfax rebelled and the other nations followed. This was crusade is rather special in that it was led by a hero aligned to the Choir of Contrition and it was also successful - the only one of its kind. In its wake, the Dread Empire was dismantled into several Crusader Kingdoms.

The second crusade was launched as a response to a Praesi rebellion which aimed to re-establish the Empire and overthrow the Crusader Kingdoms. It was an overwhelming victory for the Good and Praes was crushed into dust. It was the second time the Tower was destroyed.[1]

It’s believed the real threat of extermination gave rise to Dread Emperor Terribilis II, one of the most effective Dread Emperors in the history of Praes.[2][3]

The third crusade was a disaster and the end of the Crusader Kingdoms. It was repelled by the aforementioned Dread Emperor Terribilis II and afterwards, the Kingdom of Callow was occupied by the forces of Procer.[4][5][6][7] It indirectly led to the Sixty Years War.

The Fourth Crusade, a last-ditch attempt to reclaim Praes, was drowned in such a sea of blood by Terribilis that never again was a crusade to turn East.[1] A depiction of it is shown in the Tower.[8]

Not much is known about it, except for the fact it was led by a hero aligned with the Choir of Contrition against the Dead King. It was not successful.[1]

The Sixth Crusade was also spearheaded by Contrition against the Dead King. He mentions that “the depths of that failure led to the birth of the Seventh, in many ways”.[9]

The Seventh Crusade was also waged against the Kingdom of the Dead. After the failure that was the Sixth, the First Prince considered the Dead King’s offer of peace on the borders for giving him five hundred children every year. In response, the White Knight - at the time sworn to Contrition - summoned a Hashmallim and three hundred thousand souls living in Salia marched on Keter.[1]

We know that was the crusade were the air has been poisoned in the Kingdom of the Dead and Hanno’s Recall showed that the Dead King managed to compromise the high-tier leadership of the army.[10][11]

Not much is known about this crusade apart from the fact it was instigated by the Choir against the Dead King and that it failed, yet again.

Everyone agrees that the Ninth Crusade occurred though no one can recall what it involved. It’s very likely an Absence Demon was used.[12]

The Tenth Crusade was launched by the First Prince Cordelia Hasenbach against the Dread Empire of Praes. It looks to be the largest crusade yet, with the Good forces being composed out of Thalassocracy of Ashur, the Principate of Procer and the Dominion of Levant. The forces of Evil are made out of Callow, the Dread Empire, the Kingdom of the Dead and the remnants of the Everdark. 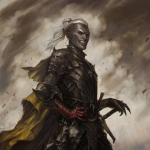